All pieces now in stock

The anatomy of a fountain pen

Discover the parts of a fountain pen

In 1833 Lewis Edson Waterman created the first fountain pen using the radius of a wheel. Since then, the fountain pen world has evolved a lot in terms of materials and shapes. However, there are always four main parts in each fountain pen: the barrel, the cap, the charging system and, last but not least, the nib. Nowadays, we can find fountain pens whose bodies have been elaborated with an  immense range of exceptional materials.

Sometimes the material in which the barrel is made becomes a hallmark of the brand. For example, the most exotic woods are a distinctive mark of  Graf von Faber-Castell pieces, such as the celluloid known as Auroloid is of  Aurora.

The same is true for Japanese writing brands that manufacture traditional and complex pieces in which tradition and craftsmanship play a fundamental role. Thus,  Nakaya is well-known for its ebonite pieces covered lacquered with Urushi.

In turn, we can distinguish three parts in the body .

This part not only protects the nib when the fountain pen is not being used, but it also prevents the ink from drying. Generally the cap presents ventilation holes to eliminate moisture condensation inside. Normally, it is made of the same material as the body, however some brands such as  Graf Von Faber Castell, create caps in a different material given their fountain pens a special aesthetic.

Usually, the cap includes different components that embellish the piece:

As a matter of fact, during the Second World War, the American army banned the wearing of any element that could be confused with the insignia of their uniform. Therefore,  Sheaffer created smaller clips for their fountain pens so that they are known as  Military clips.

Clips are so popular that one distinctive feature of the Cigar collection by the  Japanese house Nakaya is the lack of them. Nevertheless, they have designed the  rolling stopper for those who want to add a detail to these minimalist pieces.

We can find different cap closing systems, the most common are: pressing, gyratory, magnetic and screw on caps.

Although the cap plays a quintessential role in the design of the great majority of fountain pens, not all of them have one. We refer to  retractable fountain pens, functional writing items that offer the convenience of a click pen without renouncing the smooth writing experience of a fountain pen. The brands that stand out for having well developed these complex and sophisticated mechanisms are  Pilot with the  Capless line,  Platinum with  Curidas collection, and finally  Lamy with the model  Dialog 3.

Finally, the nib. It is the most important part given that it will allow us to write. It can be both made of or plated in different materials such as: stainless steel, gold, palladium or ruthenium.

Furthermore,  among gold nibs we can find different types of caratages:  Nakaya and  Platinum collections usually feature a 14K gold nib,   Montblanc and  Montegrappa Special Editions use 18K gold nibs,  Sailor is well known for its 21K or 24K nibs , and finally  Visconti chooses 23K palladium nibs for more of its  Limited Editions and some of their regular lines like the  Homo Sapiens or  Divina lines.

Inside the nib, we can find different parts: Understanding the functions of each component, will allow you to  choose the option that best suits you, or make the best out of the fountain pen that you already have.

If you need more information just contact us, our team will be glad to help you.

The quality of this watch is excellent, and so far it seems extremely accurate. The bracelet is one of the best I've seen, and very comfortable.

Luckily, mine fitted perfectly out of the box, but be aware that it doesn't come with any extra bracelet links; if you have large wrists then I'd recommend getting in touch with the helpful people at Iguana Sell before purchasing, to make sure it will fit (or you can get some extra links supplied with it).

I got a great price too; my only regret is that I didn't wait until Black Friday, as now it's even cheaper! 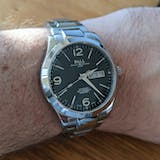 This pen looks and feels even better than in the pictures. The ‘Honeycomb’ marble finish along with the gold trim are quite stunning. I chose an extra fine nib as I write in a small space in a daily diary and it suits me perfectly - very pleased

Love this pen. As an avid collector this was a grail pen for me and it is already a favourite. The feel of the lava barrel is like no other, and the workmanship excellent. Highly recommended.