Are you familiar with Porsche Design watches?

Born in Stuttgart in 1935 into a family with close ties to the world of automobiles, Ferdinand Alexander Porsche founded Porsche Design in 1972, a watchmaking company driven more by the creative spirit of its founder than by a lucrative business idea.  Ferdinand Alexander worked for many years as head of design at the car brands founded by his grandfather: Porsche and Volkswagen, and there he designed some of the masterpieces that became iconic in the world of sports cars, such as the Porsche 911.

Since he founded Porsche Design, Ferdinand Alexander has followed a clear design philosophy: optimizing functionality. That is, to simplify the shape of his watches without compromising the essential. The first watch he designed revolutionized the watchmaking industry, with the appearance, in 1972, of the world's first completely black matte watch, both in its case and bracelet. The dial of this model was inspired by the indicators on the dashboards of Porsche sports cars. Porsche Design began its journey in collaboration with Orfina, and after 6 years with them, decided to bet on the firm IWC Schaffhausen, signing a collaboration agreement with it for 20 years. Shortly after starting this collaboration, both companies realized their success, as their first piece was a commercial success.

In this way, Porsche design once again revolutionized the watchmaking industry, this time with the appearance of the first wristwatch with an integrated compass: the Compass Watch. Elegant and sporty, this model featured a dial available in two colors, black or khaki green, simple indexes and a discreet date indicator. As a single decorative element, it had two bands that crossed it, from twelve to six and from three to nine, forming a cross. Later, in 1980, they again achieved international success, with the first watch with chronograph and bracelet entirely made of titanium: the Titan Chronograph. Three years later, they launched another of their most iconic models: the Porsche Design Ocean 2000, a diving watch resistant to water up to 2,000 meters (the watertightness record of a watch at the time), made to order and according to the technical specifications of the Navy of the Federal Republic of Germany. After this successful collaboration, the agreement between IWC Schaffhausen and Porsche Design expired and both companies decided to go their separate ways. It is from this moment on thatPorsche Design begins to work with Eterna. Two models stood out notably during this period: the 2004 Indicator model and the 2007 Worldtimer P'6750.
The first of these was once again a revolution from both an aesthetic and technical point of view, as it presented an automatic chronograph with digital totalisation of hours and minutes that offered a groundbreaking aesthetic. The second watch offered the local time by means of three central hands and the reference time, over 24 hours, in a small vertical window located at nine o'clock. In 2014, Porsche Design decided not to look for a new stable partner in the Swiss watch market, and began to manufacture its own parts. The first model manufactured was the Timepiece No.1 Limited Edition, a sports chronograph whose aesthetics reflected the entire Porsche Design heritage. This was followed by the Titanium Limited Edition Chronograph, which shared all the technical and aesthetic characteristics of its twin brother except for the black case lining. Today, Porsche Design has several collections, but all of them maintain the same spirit that gave birth to the brand. From the beginning, Ferdinand wanted to transfer to the field of watchmaking the same concept with which he had succeeded in the automotive industry: a product with a consolidated design that reflects a great deal of engineering work away from fleeting fashions.

A characteristic of Porsche Design watches is that many of their straps are made from the same leather as the interior of Porsche vehicles. But it also uses other materials for its straps and bracelets such as rubber, textile, titanium or alligator, like the automatic Porsche Design 1919 Datetimer Eternity of the image bellow. 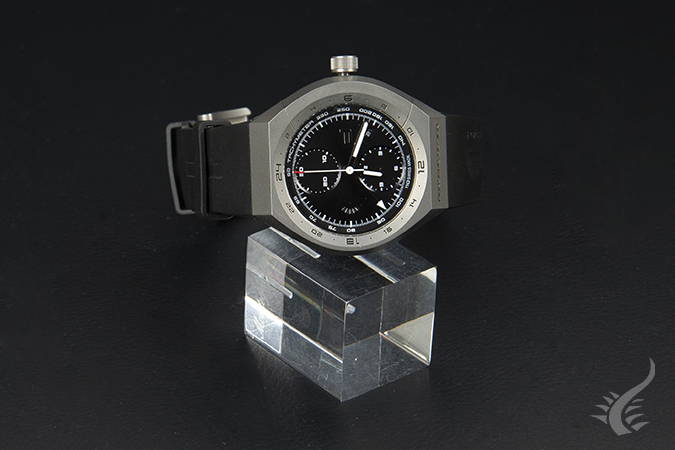 The monobloc actuator is the latest innovation from Porsche Design, all its watches are made of titanium and its case, as the name indicates it, is a unique block where we will find both the bezel and the chronograph pushers integrated in its case. And it is precisely in these pushers where we find the most innovative detail of this collection. Drawing inspiration from the sporty Porsche 911 RSR and more specifically its mechanical valve technology, the Monobloc Actuator watches includes a single articulating “rocker arm”-style pusher to control the chronograph. Another unique feature of this collection is the small-second subdial, which in these models is represented with a small opening at 9 o'clock in which a rotating disc appears with whit-spoked stripes or with the motif of the checkered flag that simply indicates to the user if the watch is working. 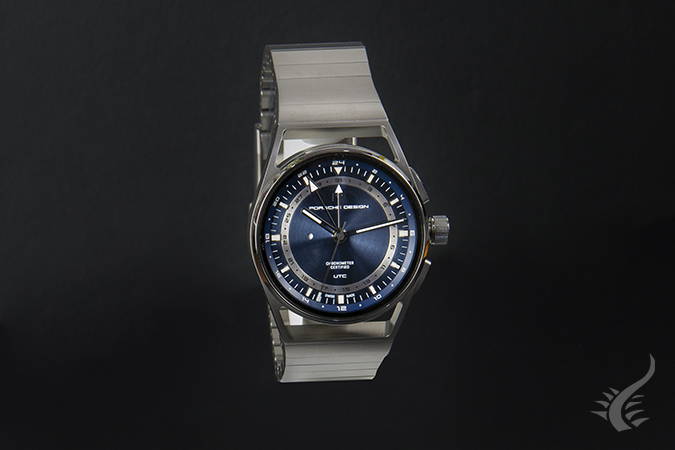 This collection is directly inspired by the iconic 911 car from Porsche Design, with a much more purist and elegant design without losing its sporty essence. The first model with Flyback function from Porsche Design was born within this line, thanks to the brand's first inhouse movement, the Werk 01.200, a caliber that also has COSC certificate. This function allows its user to measure successive time intervals, since the chronograph is reset and starts again without the need to first stop the chronograph, you just need to press once the button and it will restart. This is ideal for automotive activities where the lap times of a car have to be recorded as accurately as possible.

Within this collection Porsche presents its latest model, the 1919 Chronotimer Flyback Blue & Leather, which includes the traditional functions of the 1919 models but with an attractive blue color. This model includes a chronograph without tachymeter scale, the classic small-second subdial of Porsche Design, that we presented in the Monobloc section, the flyback function and the COSC certificate. 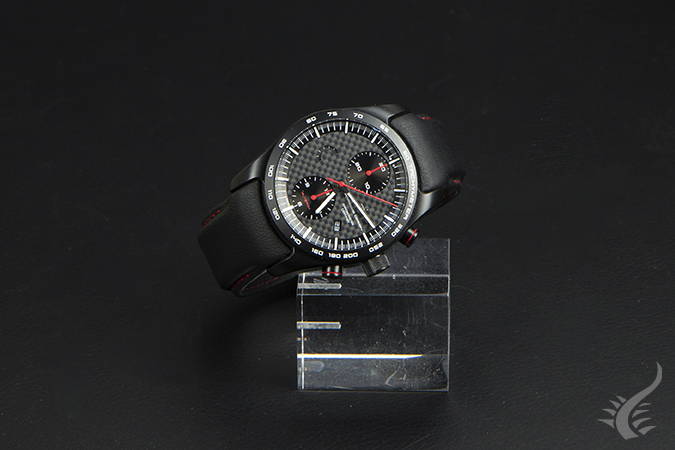 This collection is a tribute to the first titanium chronograph created by Porsche Design, it also features a very sporty design in keeping with the brand's history. Chronotimer watches are characterized by having an extremely minimalist dial, seeking ease of reading. One of the surprising details of some of these models is the smoked sapphire back glass, which reveals the movement of the watch. All Chronotimer watches include the chronograph function and the tachymeter function on their bezel. For those who are not familiar with this function, the tachymeter is a numerical scale with which the average speed can be measured based on the distance traveled.

Do you like Porsche Design watches? Check out our collection.

This looks like the usual excellent minimalist Max Bill style of watch, quiet and restrained design, but the contents of the watch case are a totally different story. You would never know that it is a solar powered, radio controlled watch. Gone are the days when solar panels were very visible and black and an antenna had to be deployed around the bezel which needed to be ceramic or plastic. I would say this combines the best of both worlds.