When explaining the names of the mainMontblanc writing instruments, it is important to remember how the name of this German company came about. It all started in 1906 in Hamburg (Germany), when the stationery merchant Claus-Johannes Voss, the banker Alfred Nehemias and the engineer August Eberstein joined forces to manufacture fountain pens.

The company was named Simplo Filler Pen Company and in 1908 they created their first high quality fountain pen:  Rouge et Noir. A year later, in 1909 came the first Montblanc fountain pen. The name was chosen in honor of the highest mountain in the Alps, as this fountain pen represented one of the highest peaks of European technique and craftsmanship. Ten years later, the company opened the first store in Hamburg that exclusively sold its products. Soon after, additional stores were opened in Berlin, Leipzig, Breslau, Hanover and Bremen. Old advertising of the original Montblanc Rouge & Noir 1908. The reinterpretation of this piece is Montblanc Heritage Rouge & Noir

In 1924, Montblanc marks a milestone in the history of writing culture with the launch of the "Meisterstück" collection, considered to be one of the finest fountain pens of all time. Although in recent years certain materials may have changed in order to create a better writing experience, a Meisterstück today looks very much like one made in 1924. So successful were Montblanc pens that the company changed its name to the Swiss mountain.

Today, within this collection we can find several models of fountain pens: the  149 model;  LeGrand or also known as 146;  Classique or 145 model and, finally,  Mozart, the smallest model of Montblanc. But before going into the specific details of each model, it is convenient to explain the characteristic numbering of the name of the Montblanc fountain pens:

The 14x models are undoubtedly the most sold, given and desiredMontblanc and also possibly the best known worldwide. There are many versions and variations of the model (platinum trim, metal cap, gold, etc.) and above all three classic sizes: 149, the largest, 146 and 145. Montblanc Meisterstuck 149 is the fountain pen that has been manufactured since 1952 and today, remains one of the best fountain pens for handwriting. Its size is large, reaching 144 mm long and 15 mm thick, which allows a large load capacity.

A particular detail of this fountain pen are the three golden rings on its cap. In the middle gold ring is engraved with the serial number and the name of Montblanc, and serves as a way to check the authenticity of the pen. Its cap is made of precious resin and torpedo-shaped and features a gold-plated clip with an individual serial number.

The thread inside the body is made of high-strength resin and to completely cap or uncap the fountain pen it is necessary to turn it three times. There are also small indentations that show the level of charge. One of the highlights of this model is its handcrafted 18-karat gold nib with platinum inlay available in EF, F, M, OM, OB, OBB, B and BB, which makes it a luxurious writing instrument in the purest European tradition. Montblanc Meisterstück 149 with its 18K gold nib and gold trims or platinum trims.

The 14x series began production in the late 1940s to replace the 13x series. The production start year was 1949 for both the 149 and 146 models, but there is no reliable data to date the birth of the 14x series.

The first generation of the 146 lasted from 1949 to 1960, and was characterized by a black celluloid body with a ribbed window at the end of the body to see the remaining ink level, piston loading, ebonite feeder and two-color gold nib.

In the 70's the second generation of the 146 began to be manufactured. The barrel was changed to resin and a smooth window was incorporated to see the ink level.

The third generation began production between 1993 and 1994. The standard model of this generation features a resin body, with a ribbed window similar to the first generation, as well as a two-color nib, which we also saw in the 146 of the 1950s. Today, this is the version that is marketed with some changes and additions, which are also perfectly dated and affect the production from the 1990s to the 2000s. For example, the PIX sign that was introduced in 1997 and is visible on the central ring of the cap and on the back of the clip.

As for the main technical characteristics of this model, it is worth mentioning that it is piston-loaded, its size is 142 mm closed, its weight is 25.3 gr. and all its nibs are made of 14-karat gold. Something very characteristic of the  Classique model, apart from its size (138 mm closed / 120 mm uncapped / 10 mm wide) and its weight (21g closed / 12 g uncapped) which is well below the rest, is that its loading system can be by plunger or by cartridge or converter.

Although the previous models have a higher price, the proportions of this model make it an extremely elegant and discreet pen with a 14 karat gold nib. In the image below, detail of  Montblanc Meisterstück Classique with Gold Trim. This fountain pen is made of black precious resin with elegant details that enhance the emblem of the white star of Montblanc, making it an iconic model of the brand.

Its main feature is its small size, since at first glance it may seem like a classic Meisterstuck but made on a small scale (113 mm closed/96 mm uncapped / 119 mm with the cap screwed on the top of the body of the pen / 9 mm grip section) with a weight in proportion to its dimensions (16g closed/12g uncapped). Featuring a 14 karat 585 gold nib, it is undoubtedly a pocket fountain pen that cannot be missing in a writing lover's collection.

If you want to know more about Montblanc pieces, do not hesitate to visit our website. At  Iguana Sell in Madrid, you will find a wide collection of  Montblanc pieces in stock that you can buy with 24-hour express shipping.
And, of course, if you require more information or wish to place an order, please do not hesitate to  contact us. You can write us an  email, or visit  our shop in Madrid, in  Núñez de Balboa 90. It will be a pleasure to help you.
We look forward to meeting you!

This is my 4th U-Boat watch and in my opinion the best looking one so far. 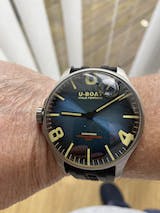 I purchased this watch and I love it. I looks exactly like the picture. Its easy to read and at night it glows. Thank you.

I love this pen. The slight weight and polished finish feel great in the hand. The nib is wonderful. BB nib is really fun to use. And the pen is beautiful.