COSC is an acronym in French, Contrôle Officiel Suisse des Chronomètres, which means Swiss Official Control of Chronometers. This certification has been seen as an added value of the watch. But what does it mean for a watch to receive it?

The term chronometer is often mistakenly attributed to time instruments equipped with an additional button-activated mechanism that allows the time of an event to be measured. Such an instrument should be called a Chronograph.

A COSC watch is a high-precision watch capable of indicating seconds, and it has been subjected to various tests at different temperatures. Each one is unique, identified by a number engraved on its movement and a COSC certificate number.

COSC is a non-profit organization founded in 1973 by 5 master watchmakers and by the Swiss Watch Federation. Its main objectives are:


The Official Control Offices are today three COSC laboratories located in Bienne, Saint-Imier and Locle. Their mission is to test the movements presented by the manufacturers. Each of these laboratories has obtained a quality certification SCS (Swiss Calibration Service). They have high-tech equipment, which due to the high peculiarity of the needs, are exclusively tailored, since there is nothing like it on the market.

The COSC management, based in La Chaux-de-Fonds, coordinates the operation of the Official Control Offices and establishes the chronometer measurement methods and the marketing, communication and defense plans for it. COSC medallion that comes with some watches.

The Control Offices are the only laboratories in the world that industrially apply these standards, thus sending more than 1,000,000 official chronometer certificates per year. However, this volume only represents 3% of Swiss watch production, confirming the exclusivity of this chronometer.

Many brands opt for this certification to bring the prestige to their watches. A clear example is the case of Ball, which has practically all its movements certified COSC in its Engineer Hydrocarbon line.

It is important to emphasize that these tests are performed on the movements and not on the finished watch. Each movement is tested for fifteen days, in five positions, at three different temperatures. With the help of cameras, daily measurements are taken to be able to compare it to two different atomic clocks synchronized by GPS. Each movement has to overcome seven eliminatory criteria; the daily average ratio, average variation ration, difference between ratios and positions. Failure to pass one of the criteria denies COSC certification.

However, this is not the only quality certification of movements, as more and more brands are developing their own tests, which compete on precision.

Of course, if you require more information or want to place your order, do not hesitate to contact us or visit our store in Madrid, Núñez de Balboa 90.
It will be a pleasure to help you 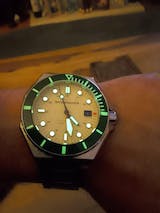