Graf von Faber-Castell introduced its first "Pen of the Year" in 2003, and an incredible cascade of annual limited editions followed. Each one tells a different story, and always focuses on the development of humanity.

A pen, a story

The pen of the year in 2022 is inspired by the culture, aesthetics and religious rites of the Aztec empire, created in 1428 in what is now Mexico. People are fascinated by the Aztec civilization, by its political systems, its artworks and the myths that make up its creation.

THE MYTH OF THE FIVE SUNS One of the Aztec myths is the historic 24-ton Stone of the Five Suns, found near the Great Temple of Tenochtitlan, the capital of the Aztec Empire. The symbols portrayed on this stone divided the cosmic era into five epochs, each of which was ruled by a solar god: the Sun of the Jaguar, the Sun of the Wind, the Sun of Rain, the Sun of Water, and our present world being the Sun of Movement.

Legend says that during the first solar cycle of the Jaguar Sun, incarnated by the god Tezcatlipoca, humans used a volcanic crystal to make swords, daggers and sharp points. The grip zone of the Special Edition 2022 is made of this cold, matte stone called obsidian.

The Aztecs adored the god Xiuhtecuhtli, the turquoise lord, who was married to Chalchiuhtlicue, goddess of the lakes. In the Aztec culture, water was a very precious commodity, and thanks to their advanced culture, they were able to supply their huge population with food and drinking water, through the creation of aqueducts and canal systems. The precious stone turquoise was considered one of their most valuable treasures, used to decorate masks, knives, shields and in rituals, thus it is a fundamental element of the feather, adorning its two ends. According to Aztec mythology, when they created the world, the gods created a heaven, an earth and an underworld. Mictlantecuhtli, the god of the dead, adorns the cap of the Pen of the Year 2022. The engraved relief depicts the god of the dead as a skull surrounded by feathers and symbolizes all the power and magic of this divinity.

At the other end, the eagle is represented. According to mythology, the Aztecs were to establish their new home in the place where an eagle would sit on a cactus devouring a snake. The design of the cap represents that cactus and the eagle engraved on the disc evokes the prophecy of what is now Mexico City.

Skulls are a central element of Mexican culture. The Aztecs considered skeletons to be a symbol of fertility, health and excess, which is why many of their buildings were constructed with walls of human skulls.

The walls found in the Templo Mayor of Tenochtitlán were built by rows of perfectly aligned skulls and are the inspiration for this design. The pen body has a diamond-like carbon (DLC) coating that gives the writing instrument an elegant appearance and durability. The 18-karat gold nib is ruthenium-coated and hand-worked, promising a unique writing experience.

The exclusive edition of the Pen of the Year 2022 "The Aztecs" is limited to 375 fountain pens, available with M, F, B and BB nibs, and 125 rollers. Each individually numbered piece is presented in a high-gloss polished black wooden case with a certificate of authenticity signed by Count Charles von Faber-Castell.

Help me choose the perfect nib

Firstly, I always call up to check stock. The girl/lady with spansih accent who picked was super helfpul in recommending this grey clour as the navy I orginally wanted will only be avalible after summer (where Visconti's factory closes). This grey was recommende over the classic black and I am super thankful to have picked this colour. I love this light dove grey leather. She even tested out the elastic loops to see how the homo sapien and van gogh will fit and how the clips will fit inside the loop even. What great service and support. Iguanasell is my only go to for pens now and with tax included, no need for addtional 20% custom and duty.

The only niggle I have personaly is perhaps the zip should be in silver vs. gold, the latter matching the blue, but this was in stock, so no complaints.

Being used to use a much more slimer profile of my 2 pens case normally hosting a MB or parkers, much slimer pens than the Homo Sapiens/Diplomat Areo/Lamy 200 type of width, which normally you would need the case you cannot use the ones with elasic loops, but just 2 pen holes with a flip over case, this Visconti 4 pens case is humongous adn that includes the loops hole as well. I guess you need it for the chunky size pens. 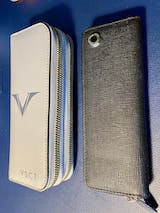 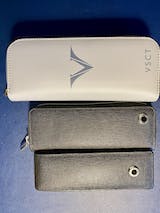